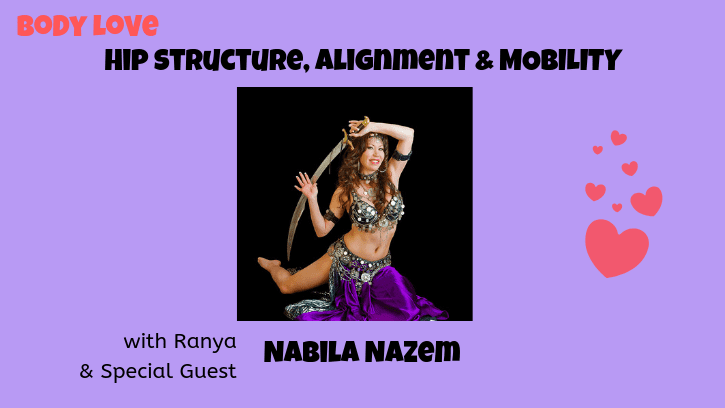 Special guest Nabila Nazem, New-York based dancer and dance instructor, visits the Ginger City to geek out with Ranya about hips! Nabila is a hip afficionado for sure, having gone through a bilateral hip replacement, doing plenty of research in advance of that, and back to dancing full steam ahead! In this program, we go deep into hip anatomy, how the bones fit together, individual differences between people, how it affects alignment and range of motion in the dance. Includes a look at Ranya's and Nabila's hip x-rays! Ranya also interviews Nabila about her interesting upbringing as the daughter of a famous bodyworker, Lauren Berry Sr., the founder of the Berry Method.

A lifelong dancer, Nabila moved from California to NYC to pursue a vocation in dance and has been performing with her signature dynamic flair in the New York area for nearly 25 years. She holds a BFA in dance from NYU's Tisch School of the Arts and has extensive studies in several dance forms. With a foot firmly in both Western and Middle Eastern movement traditions Nabila has taught both Ballet and Belly Dance and has been a guest workshop instructor at the American College Dance Festival at Hofstra University. Her Middle Eastern dance education began with the late Serena Wilson and continued under the guidance of Azza Amon, Ranya Renee, Anahid Sofian, Dalia Carella, and Elena Lentini among others. When not performing, she teaches, enjoys ongoing study in classes and workshops, and is an avid Bikram yoga practitioner.

“Thank you for sharing all of your expertise. The content is very useful and unique. A game changer!”

“I am more than excited to be Ranya’s student again, in person or online. She is simply one of the best!”

” Thank you! Navigating around to sections among the wide variety of course types is great, an amazing resource.”

“Thanks for the excellent instruction!”

“Love you and so happy to be joining you for LIFE!” OPTIONAL: Add Baladi from the Ground Up online training

2 hours of easily searchable video content, organized from the feet up to the head, to get in touch with your body from the inside-out, using the juicy movement vocabulary of traditional Egyptian dance. Baladi means "of the country" - the grounded homestyle dance of Egypt. Baladi style is distinctive for deep connection with the pelvic floor and abdominal muscles, feeling your connection with the earth and really owning your body.
Edit
Edit

Pay securely with your credit or debit card (via Stripe), or through Paypal

Ranya interviews Nabila on her upbringing as a bodyworker’s daughter... and her present as a successful double-hip replacement recipient

All prices in USD